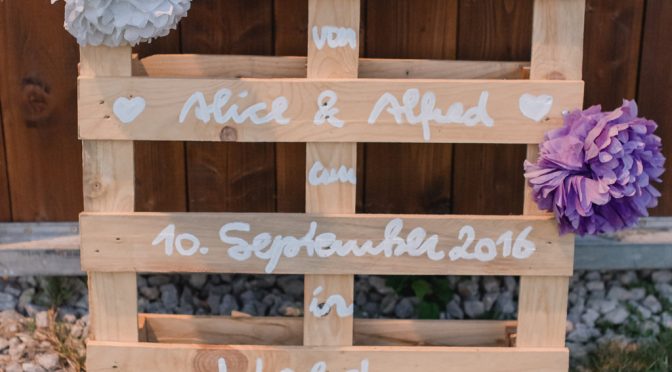 One of the things I heard the most – and loathed hearing the most – was: “You know that as much as you plan, something will definitely go wrong on your wedding day. Please keep that in mind.”

When I plan, I plan for things to not go wrong, especially on my wedding day.

I put an awful amount of time and brain into minute preparations and I can tell you that the result was worth every second of it. We had the most beautiful wedding that was exactly the way we had dreamed it up to be.

Did things to wrong?

Well, if so then I didn’t notice. This means no, nothing went wrong.

Yes, there were plastic straws in the drinks at reception (Why???) and we forgot to have the odd photo taken we’d discussed beforehand) but apart from such little details that didn’t matter in the great picture, everything went as planned (I’m patting myself on the shoulder as I write this).

Actually, we were positively surprised how the little things mattered:

Our tissues for happy tears were gone before I even so much as approached the aisle, together with the soap bubbles that made for such wonderful photos. Our guest book was regularly frequented which may or may not be connected to the fact that the photo booth Mr A so craftily built was right next to it – and the results of both were spectacular. We had asked each guest to send us a photo of themselves including something that reminded them of us and had those photos printed to use with our guest book along with wed libs so no one would have an excuse of “not knowing what to write”. There were also stickers, stamps, washi tape and coloured pens to help the less creative.

We provided little “emergency boxes” in the wash rooms which were also well received, especially by the ladies.

On the whole, there is nothing we did that was “too much”. I had had a million more ideas of what we could have decorated/ prepared/ crafted but in the end we were extremely happy with what we had and not once did we hear (or were we afterwards told) “You should have had XYZ”.

Oh, yes, there was one thing we messed up but didn’t care about:

We had choreographed a bachata to Elli Goulding’s “Love Me Like You Do”, then a salsa to Marc Anthony’s “Valio La Pena”.

While the bachata went to plan and the crowd was roaring with applause, Mr A completely missed a figure early in the salsa.  It is a pretty fast song and the the choreography was somewhat demanding – especially given we hadn’t danced much for the last year and a half before the wedding!

Did someone notice? – Yes, one of my friends and possibly her boyfriend (because they are avid salsa dancers themselves). Other than that – nope.

Did we care? – Not at all. We were having too much fun at our own wedding to so much as give it a second thought. It was great. How was it at your wedding? Did something go pear-shaped? Did it create drama or could you shrug it off?