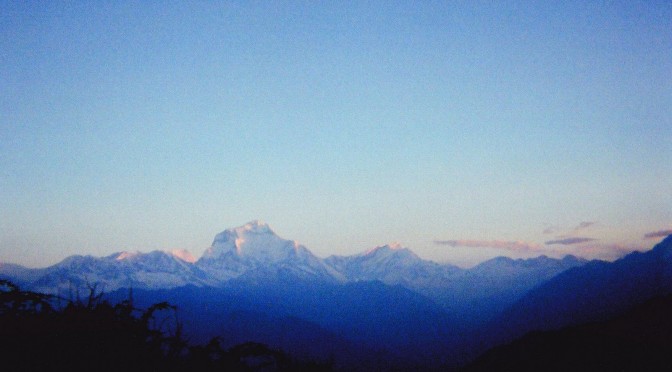 Walking the Annapurna Circuit was something people had recommended I do whilst travelling Nepal. I wasn’t so sure about this. 2-3 weeks of walking, by myself, crossing a 5,400m high pass didn’t sound all that appealing to me. Would I even be physically able (i.e. fit enough) to do it? I wasn’t at all sure about it.

Until I arrived at Kathmandu and started talking to my Nepali friend Narayan who also runs Haribol Treks, a travel agency in Kathmandu. He was sure I would be able to make it – and even enjoy it. He had walked the Kali Gandaki valley to Jomson with my parents and figured from there that I was of the same kind. Narayan offered to send me off with one of his most trusted guides and when we sat down to discuss the details it gradually started to sound like a good plan.

It ended up being one of the best decisions of my life.

Ganesh, my trusted porter-guide, and myself got off the mini bus at Besisahar and were immediately on our way. The direction was always uphill and there was only one possible way – therefore no chance to get lost or take a wrong turn.

The first days were tedious as the weather was humid and unexpectedly hot.

Ganesh kept up a steady pace and I followed, almost literally in his footsteps. While at first he was quiet and would barely talk to me after a few days of getting used to each others presence we started to have little conversations and – finally – laughs.

As the vegetation became more sparse, the views became more spectacular. The first big mountain we got to see was Manaslu. Standing at 8,163m it’s definitely a big one and I turned my head right many-a-times to soak up her immensity.

Days later, at our camp in Braga we enjoyed the enormous vista of Annapurna III and Gangapurna. We stayed there for two nights to acclimatise and walked up to the impressive glacier of Gangapurna and visited a beautiful little Buddhist temple in Braga – because Ganesh found the person who had keys. He left an offering and both of us received a blessed piece of colourful thread to protect us, which I wore around my neck for the remainder of my trip and then as a wristband until it fell off.

The day’s stages  were planned exteremely well – we would get up at seven, leave after breakfast, stop somewhere for lunch and arrive at our destination in the early to mid afternoon. There we’d drop off our bags and have some tea or hot lemon then be setting off for another hour or so further uphill to help me acclimatise and would sit for some twenty minutes, often sharing a bar of chocolate or a handful of trail mix, before heading back to our accomodation and a dinner of dhal bhat, the traditional dish of Nepal (lentils with potato curry and bread).

Despite the physical exertion I had never been so relaxed before.

When the brand new SD card of my brand new DSLR camera stopped working on day 4, I was devastated. Of course I hadn’t brought back-up to save on weight.

In hindsight though it wasn’t as catastrophic as it initially seemed: Ganesh helped me find disposable cameras and I only took pictures if it was really worth it – and looked around a lot.

I’m tempted to say that my experience of the Annapurna Circuit was actually enriched by the lack of possibility to take an infinite amount of pictures. Still, I’ll bring back-up the next time I’ll do something similar.

Physically, I adpted very well to the conditions, especially the altitude: In the afternoon – especially in the Manang area where the wind likes to pick up after midday – I would sometimes get a light headache (which I will also get on windy days at home). However, by the time I went to bed it was usually gone.

I never had any nausea or other symptoms of high altitude sickness (which I’d experienced before and found rather unpleasant).

We were very lucky with the weather, never experiencing any rain while we walked (though pretty impressive thunderstorms at night that made the Himalayas tremble with thunder – WHOA!) – except for the day we crossed Thorong La. Of course. We left very early in the morning (around 3:30am) to a starlit sky. Still, Ganesh was uneasy, mumbling things I could not understand. He knew. Around 4am clouds came in and only minutes later it was snowing heavily and wouldn’t stop until we were resting in the little hut at Thorong La Pass. Strong winds also came and made the already tedious hike even more strenuous.

Again, Ganesh did the right thing by not letting me rest every few hundred metres once we were above 5,000m (the altitude really slowed me down – my legs had never been so heavy) but told me to “come on”. When he offered to take my day bag I realised he meant business and made sure I stayed closely behind him.

On top I couldn’t stop crying. Literally. I could not stop. As if all my pent-up emotions had decided to make a reappearance at once. Despite embarrassing Ganesh (which I was truly sorry for) it felt liberating. And then all of a sudden I was done crying. We had another cup of hot lemon and started the long way down – all the way to Mukhtinath.

From there I retraced my parents’ steps in the opposite direction – Kagbeni – Jomsom – Marpha – Tatopani – Poon Hill – Ghorepani.

First there was barely any vegetation at all. Then came the apple trees of Marpha (along with apple strudel, apple cake, apple pie, apple schnapps,…) and soon we were walking through dense forests of flowering rhododendrons, often accompanied by a monkey or two which stayed mostly invisible (but highly audible).

…and all of a sudden Ganesh and I were sitting in a restaurant at Phewa Lake in Pokhara, leaving for Kathmandu the next day. We took a bus back to Kathmandu and while my clothes got an extra spin in the laundry machine, I showered and was finally able to properly wash my hair again.

Of all the amazing things I experienced during my year of travelling – or actually in my life so far – walking the Annapurna Circuit definitely ranks high. I would do it again any time.

Have you had a mountain-experience that simply blew your mind? I’d love if you shared it! Don’t forget to tag @Aliciouslog on Instagram and Aliciouslog on Facebook so I can see your photos 🙂

My whole trek was organised through Haribol Treks whom I cannot recommend highly enough.