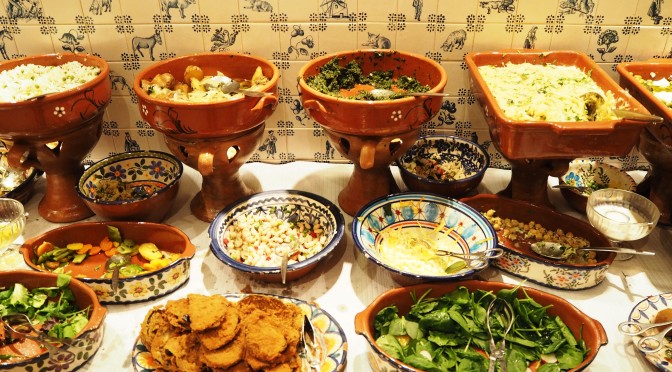 As always when I travel, Happy Cow had given me a first impression of my vegan options besides supermarkets. I had made a list of restaurants that were somewhat close to our apartment and packed a few bars just in case. Did I end up needing them?That’s a tricky question because even though I ate most of them, strictly speaking I would have survived without. Also, I ate only one in Lisbon and all others on our subsequent tour of the Alentejo and Algarve.

Lisbon is definitely a big enough city to boast a vegan scene.

On Sunday, our first day, we had wraps for breakfast (“I’ll have the chicken wrap…without the chicken.”) and later dinner at Chapito a Mesa which we happened to pass on our way down from the Castelo de Sao Jorge. Both of us had a big bowl of salad, which was surprisingly tasty (fresh, crunchy, lots of different flavours and textures), and chips along with an amazing view over the roofs of Lisbon and the Rio Tejo.

On our way back to the apartment we stopped at Pingo Doce supermarket for fruit and water.

The next morning, before boarding a train to dreamy Sintra, I headed into Celeiro Dieta, a chain of organic supermarkets, to pick up lentil empanadas and a piece of cake for breakfast. All pre-packed but all vegan and actually quite delicious.

After our return we had a beautiful all-vegan buffet dinner at Jardim das Cerejas. People would come and go – many of them tourists from Germany or France – while we enjoyed our meal. For our last evening in Lisbon, Mr A took me to Terra, possibly the most well-known vegetarian restaurant in Lisbon, if not Portugal.

The buffet was mostly vegan and the waiter patiently explained to me which items were not. As we had made a reservation we got to sit out on the beautiful terrace that feels like a garden with its trees and even a little fountain in the back. Both of us ended up eating so much that we greatly enjoyed the walk back to the hotel.

Be aware that many restaurants will be closed Sundays and/ or Mondays.

Generally, the Portuguese cuisine is very fish and dairy oriented. Regular bread will often contain milk. On the upside, in every deli or restaurant, the staff would go to the kitchen or bakery to ask if they weren’t sure their breads were dairy- and egg-free.

At many restaurants your choice will be limited to salads, chips, olives and bread though, so you may want to plan the odd visit at a restaurant that explicitly caters for vegans. However, a few places mentioned in the Happy Cow app were closed – either permanently or for renovation – which means that it’s probably a good idea to call in advance, especially when planning to go out of your way for a vegan meal.