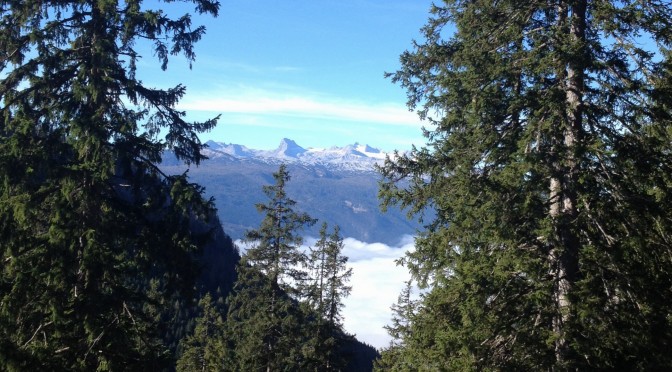 Every year we will at least once find ourselves at Salzkammergut, a beautiful area of lakes surrounded by mountains (think: Sound of Music) close to Salzburg.

This year, we went skiing in Gosau in late March which was fantastic. The snow was great, the weather awesome and there were hardly any other people on the pistes.

Since autumn has proven to be rather mild again this year, we decided to have a last shot at hiking before the winter starts and as we had never been hiking in or around Tauplitz, Tauplitz it was.

Tauplitz is knows among walkers as well as skiers and offers superb views of Grimming and Dachstein with her glacier glistening from afar. Arriving late on Thursday we settled in the absolutely beautiful apartment at Ferienwohnung Hierzegger (apartment because it’s easier to cook our own food and not having to worry about where to find dinner – especially in the off-season) and soon went to sleep. I had felt a cold coming, ironically since shavasana of Wednesday’s yoga class, and hoped my sinuses would behave better the next morning. Friday morning I still felt bad but didn’t want to spend our long weekend winging (actually, I was going on about my yoga-sore muscles a lot). Also, Mr A had a light tour on offer – a walk around Grundlsee. We started off after a much-deserved sleep in and ample breakfast and enjoyed the rough gale blowing the multi-coloured leaves off the trees. In our rain gear we didn’t mind the occasional spout but still decided half-way at Gössl that we’d done enough for the day and took the Postbus (public bus) back to where we’d parked the car. On the way back to the apartment we found a pharmacy where I stocked up on everything necessary to make this weekend work – and enjoy it.

While Friday had started with fog and light showers, Saturday took off with brilliant sunshine. Looking out of the window already made me feel better. Well, that and the drugs.

We completed the four-something-hour-long six-lakes-trek (“Sechs-Seen-Wanderung”), which wasn’t strenuous at all on what felt more like a summer’s day than autumn with temperatures around 15 degrees – on 1.600m! The whole day was bliss as we didn’t even need to wear our softshell jackets but sunglasses and a hat instead. The views were breathtaking which led to many photo opportunities which were regularly realised. Before heading back to Vienna on Sunday we drove to Gössl at the Southern End of Lake Grundl to Lake Toplitz, took a boat across and explored Lake Kammer, a hidden gem among steep rocks, where the Traun river is born. Mr A and I love feeling like tourists when exploring as of yet unbeknownst places in our relative vicitinity (i.e. Austria). We had been to that area (Salzkammergut) numerous times before but never taken the time to explore the area around Bad Aussee. Our excitement on that little zille-boat on Lake Toplitz was nothing short of what we experienced on our recent trip to New Zealand. Also, I cannot remember if I’ve ever come across a more romantic place than Lake Kammer. It must have been its remoteness (it can only be accessed by boat from Lake Toplitz) or maybe because there were only 17 of us on that boat and we were among the first to arrive at the lake (a 5-min-walk from where the boat lands). Anyways, I was mesmerised… Do you have any favourite places in Salzkammergut you would like to share? What are your favourite hikes/ walks/ treks/ viae ferratae there?