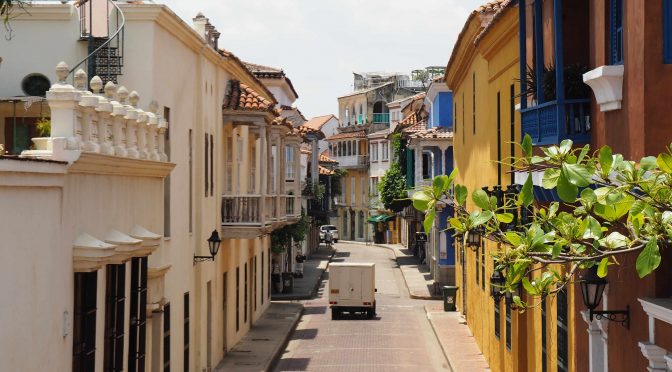 99 times out of 100 my favourite way of exploring a place will be by foot. Not only because I enjoy walking but because I like to be among the locals, see where they shop, what they wear, what they eat, how they move.

Cartagena was definitely one of those 99

From my first steps outside figuring out whether Colombia really was as dangerous as it is often perceived in Europe to walking home by myself after my friends’ wedding I spent a lot of time in Cartagenas streets and always felt safe and secure. I could not believe how beautiful it was, how well kept each building, how tidy the streets.

Specifically I am referring to the barrios of San Pedro, San Diego, the old parts of town enclosed by the city walls, and Getsemaní. While the former are so clean you will barely be able to belive yourself in South America, Getsemaní has recently seen an uplift that has brought along funky hostels, stylish boutique hotels and trendy bars. San Pedro and San Diego are picture-perfectly preserved colonial streets while Getsemaní is equally pretty, only with slightly more character, being just-not-as-perfect while still being immensely charming. For days I would roam these barrios aimlessly

Stopping only for food (fresh fruit) and water (often) I completely immered myself in the beauty of the colourful facades, Spanish balconies and unique street art these areas have to offer. While my (perfect in more ways than one) hotel was situated in San Diego, this gave me an ideal place to start exploring from day one. I would venture out, following this street, then another one, until I reached the city walls. There I would either walk alongside or on top of it in one direction or the other or simply take the next best street back “inside”. Have you been to Cartagena and if so, were you similarly mesmerised by its sheer beauty?