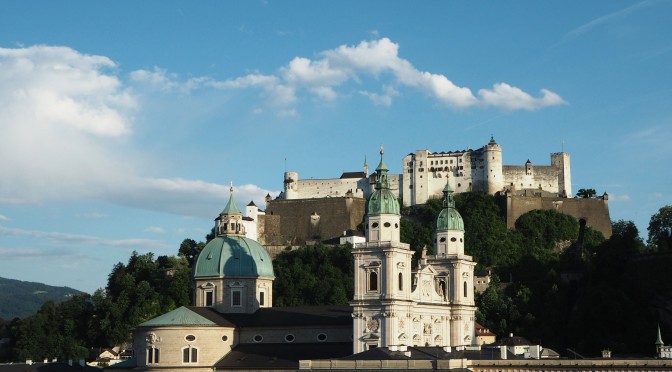 Given I did not know what to expect I was tremendously nervous as I boarded the train to Salzburg. However, even before I got off the train I had already met two lovely bloggers who were also going to attend SATC2015 – hi Corinna and Viktoria 🙂

I only dropped off my bags at the hotel and was already on my way into town so as not to be late for the first scheduled event: an instawalk around the city of Salzburg where we were able to explore Salzburg icons and share our impressions using #sbgatc15.

After a quick welcome at the Mirabell hall of Mirabell palace, a tremendously popular location for weddings, we continued to the Orangerie with its lush orchids.

From there we walked to Hotel Sacher Salzburg where we were not only able to get a peak at a double room and a suite – both with grand views of the Hohenfestung across Salzach River – but were also shown how the pastry for apple strudel is pulled out until it is so thin that one can read a book through it. If it tears in the process this is a sign you are never going to marry 😉

Our next stop was Kirchtag, a traditional umbrella maker at famous Getreidegasse, only a few houses from where Mozart was born. While it was interesting to hear how umbrellas are made from scratch and mostly by hand my favourite part of this visit was the crafty feeling of the workshop. There were so many boxes with labels, so many rolls of fabric and so many handles of all different kinds of wood – I could have spent the rest of the day there just taking photos and opening drawers excited as a child in a lolly shop.

After a refreshing stopover with iced tea and coffee at Afro Café, its interior decoration heavily influenced by the style of South African townships, we continued to our final stop – Salzburg City Hall.

For SATC2015 the City did something they don’t allow very often: In small groups we were allowed up the tight steps of the bell tower and enjoyed a spectacular 360° view of the city of Salzburg and its surroundings – in picture perfect weather nonetheless.

At the main assembly hall, SATC2015 was officially opened while our instawalk photos were live-streamed on a white wall. We also got to taste Venusbrüstchen by Stranz un Scio, little chocolates shaped after a female breast (yes, I mean boobs) filled with chestnut cream and amerena cherry. I tasted a dark one which possibly wasn’t vegan, however it was clearly irresistible. So I had another.

The first evening was concluded by dinner at three different locations – I chose Republic Café and wasn’t disappointed by their wonderful Thai veg curry along with the swift and friendly service.

The next morning started bright and early when the doors of the main event location Stadtwerk opened at 9am sharp to have us sign in for the conference and up for workshops before a filling breakfast of Verival mueslis, fruit and more Afro coffee along with Rauch juices.

All day was filled with informative and insightful workshops and session on topics such as Social Media for Bloggers by Lisa Brandstötter from Boom Creative Lab, SEO by Christoph Huber and a Q&A session by Viktoria Egger from August, only briefly interrupted by lunch sponsored by Neni. The multitude of interesting barcamp sessions and crafty workshops made it really hard to decide! #firstworldproblems

Our well-balanced dinner paired craft beer with food at Trumerei next door where the immensely passionate sommelières explained each course and why the beer-food combination worked so well.

On Sunday we got to see more of the countryside of Salzburgerland: First we were taken to Sonnleit’n Abtenau, a farm overlooking the pastures (it offers holiday homes too!) where we visited with a cheese maker and had lunch surrounded by nothing but rolling meadows, mountains and the odd cow thrown in for a clichéed photo op.

In the afternoon we enjoyed a guided tour of Hallein salt mine, including the obligatory schnaps before entering the mine via Grubenhunt (a little tram), speedy slides and an atmospheric ride across a subterranean lake.

Already it was time to say goodbye – much too early! – and everyone started taking off in different directions. With my head full of things to realise on Aliciouslog and my heart filled with the joy of having spent three days with such wonderful fellow bloggers (read: a good part of my instagram feed) I boarded my train back to Vienna. By the time I fell into my seat the tiredness of three days’ worth mingling, networking, talking, learning and paying attention was kicking in and I slept most of the ride back.

The whole weekend was nothing but fabulous and I want to thank the organisers of Salt and the City 2015 who did such a great job putting everything together and planning so meticulously with all the attention for detail and understanding for everyone’s special wishes. You ladies rock!

Along with the organising team, a long list of sponsors made sure we were in a constant state of admiration in regard to Salzburg and its sorroundings – and also well fed. This feeling was not left behind in Salzburg as we received numerous goodie bags filled with a lot of truly awesome (and almost exclusively useful) stuff for us to try, DIY and make otherwise good use of.

I am already looking forward to Salt and the City 2016!

4 thoughts on “Alicioustravels: Salt and the City 2015”