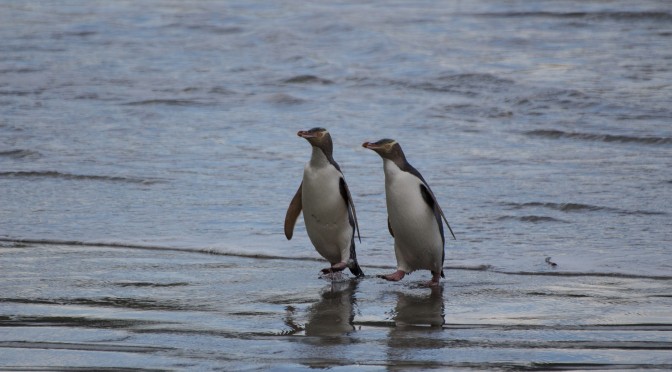 After a horrible night in a filthy hostel (I had my first asthma attack in almost 20 years because it was so dirty and because the resident cat must have slept in our bed before) we moved into spotless clean Kiwi’s Nest where owner Gloria gave us a warm welcome to her much-appreciated refuge. We had an early lunch at Circadian Rhythm café to provide enough energy to last us for the duration of the tour of the Otago peninsula we’d booked for the afternoon. We’d decided for Elm Wildlife Tour since they seemed the most professional operator, and weren’t disappointed. With only a handful of us in the van our guide took us first to Taiaroa Head via Larnach Castle, pointing out black swans, putangitangi (paradise shell ducks – but I love the onomatopoeia of their Maori name), oystercatchers and even a morepork (a little owl) on the way.

While everyone else went to the cliff to spot an albatros soaring overhead, Mr A and I had additionally booked a 60min tour of the Royal Albatros Centre where – after a quick intro – we were taken to an observation point to watch albatros chicks in their nests (from a distance with binoculars, behind mirrored glass so the animals are not disturbed). This may not sound very exciting but I tell you, it was. I’d never found birds particularly (if at all) exciting before I came to New Zealand. Albatrosses are especially enticing. They are the largest birds on earth with a wingspan reaching 3 metres. Over the course of one year they will circumnavigate the globe to arrive back at the spot where they hatched. Every other year, the female will lay an egg and it’s said that when parents and child fly off in seperate directions, they will still arrive back at their point of origin within hours of each other.

Taiaroa Head is said to be the only place on any mainland where albatrosses nest – usually this happens only on remote islands.

Unfortunately, we didn’t see a parent come in to feed their chick but we did see a few of the little furballs (”little“, as they are a lot bigger than a full grown chicken) and the hour was over way too quickly.

From Taiaroa Head we were driven to a private conservation area where we took two separate walks: The first one was down to a beach where we carefully slalomed around Hooker’s sea lions lazing about in the high grass and on the beach. They did not let on that they are the rarest species of sea lions in the world as on this particular beach they were as numerous as mallard ducks in any European pond. You had to be careful not to get too close to them and to keep the advised minimum distance of 7 metres. You should also be careful to never stand between them and the ocean. They may seem slow but can make up to 40 km/h on short distances – you wouldn’t want them to step on your foot, let alone bite you. Across the beach we took shelter from the starting rain and before long spotted two yellow-eyed penguins waddle ashore. I’m not going to start again on how cute penguins are. Very cute indeed! When they had disappeared between grass and stones, we walked over to the next lookout point, maybe two kilometres from that beach. There, we got to see a resident colony of New Zealand fur seals, complete with pups that were so adorably clumsy. In the distance I spotted some commotion on the water – which turned out to be a pod of dusky dolphins!

The weather had been anything from sunshine to windy to rain – now sleet and hail started coming down on us. Thankfully, there was another shelter and we observed the full force of New Zealand weather with at least a roof over our heads. Further out we saw albatrosses circling and for the moment this seemed enough excitement.

Then I saw something. I never say anything until I’m considerably sure I actually see something. Especially in such rough conditions. On the third blow and fluke, however, I was sure and turned to our guide to have him confirm my suspicion: there was a whale out. A Southern Right whale! At that point our rather grumpy (as somewhat fluish) guide started to get quite smitten with me. He’d never seen a Southern Right whale at this place before and he radioed the second group that was out what we’d discovered. Suddenly, waiting for the storm to pass (literally) wasn’t a priority any more and everyone was eager to be the next person to spot the blow. Still, after about half an hour we had to leave in order to make it back to the van before it got dark.

In only half a day we’d been given such an inspiring insight into New Zealand’s rich marine mammal and avian fauna! We were tremendously excited and immediately agreed to spend at least a couple of days on the Otago Peninsula on our next visit to New Zealand.