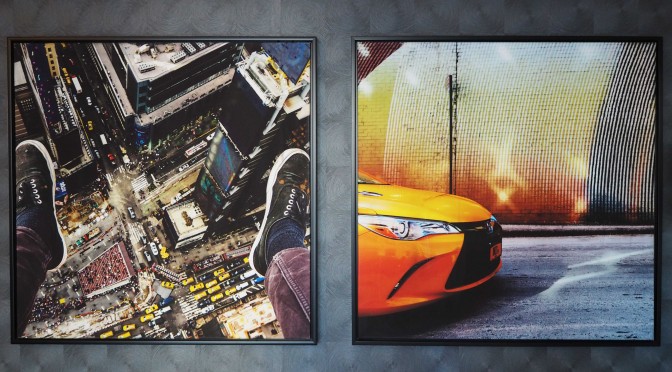 New York City. There is barely any other city in the world so much has been said, written or sung about. Everyone you’ll meet will have their own stories about this city – whether they are actually their own or someone else’s does not matter.

The buildings are as tall as they appear on TV (and then even higher), there are millions of people crowding the streets, the shops are open until the wee hours of the morning…

And then, she does.

You will turn a corner and suddenly find yourself in a little park you hadn’t noticed on the map you’re using to navigate, sit down and have a quiet lunch of this amazing falafel sandwich you just bought in a hole-in-the-wall eatery.

Since it was Mum’s first visit to New York, she wanted to see everything. She had only randomly flipped through her guidebook before the trip, assuming I would be not only guiding her around town but also provide her with a fully laid out entertainment program for the duration of our trip.

Let’s just say that this assumption was daring at best.

However, since I had been to New York before and therefore had a rough idea of what all’s to see and do we did end up with some kind of program which often was a lot more entertaining than anticipated.

Granted, I made a lot of it up as we went along. When we ended up not exactly where I’d wanted us to be because I hadn’t paid attention to the street signs I made up a story and quickly found some other point of interest to show off. Not that hard in New York City. Mum liked it.

So, what did we end up seeing?

Well, everything. Except for the museums which Mum really has no interest in. On the other hand, she is an incredibly fit person and loves extended walks just as much as I do.

Also, in close to 20 degree weather (yes, ABOVE zero) any amount of time spent indoors would have been a waste of winter sunshine.

We criss-crossed Central Park from the northern end all the way to Columbus Circle, walked up to the crown of the Statue of Liberty, across Brooklyn Bridge and along the High Line (and everything in between), from Battery Park along the Hudson River to Chelsea Market, through Chinatown and Little Italy, Soho, Noho, Nolita and all those other little cities in the city.

We watched a spectacular sunset from Top of the Rock, then had drinks at Sixty-Five (the bar on the 65th floor of the Rockefeller Center) and the sound and light show on the facade of Saks Fifth Avenue.

We ended up in the middle of SantaCon not knowing what was going on and why there were drunk elves and reindeers everywhere, had a friend join us for „An American in Paris“ on Broadway (who thankfully explained SantaCon to us) and shopped for Christmas presents at Macy’s and the Disney Store.

We also explored the Christmas markets at Columbus Circle, Bryant Park and Union Square Park, walked along Brooklyn Heights and Brooklyn Bridge Park, strolled through Williamsburg, visited the 9/11 Memorial, took an incredible amount of photos of Christmas trees and we ate. Lots and lots. All vegan food. That’s for another post though.

I’m also working on another photo-heavy post with my favourite shots of this wonderful trip I took with my amazing Mum.

Alicioustravels: Off to New York

2 thoughts on “Alicioustravels: New York City or Travelling with Mum”