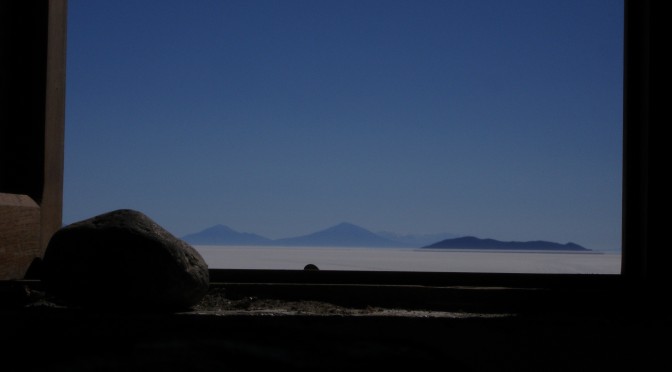 My favourite places in South America are those that left the most lasting impressions on me. Places I would love to revisit – with more time at hand to truly experience these locations. Today, I’ll take you on a quick tour.

My favourite places in South America

Not only for what it does with your brain (you lose all sense of perspective) the neverending salt flats of Bolivia will leave you speechless. They’re unlike anything you’ve seen before – so vast and wide and so white you will not want to take off your sunglasses, even on an overcast day. Just be aware that you’re at around 4.000m above sea level and that the wind can be fierce. Besides the salt flats you will also encounter multi-coloured lagunas inhabited by flamingos and lamas as well as hot springs and geysers.
Cover up against the cold and bring your camera!

One cannot count the ways this place is amazing. Despite visiting during the dry season, the waterfalls blew my mind and I stood for the better part of an hour at Garganta del Diablo, watching the water cascade down 80m, spotting bird’s nests behind the waterfalls and mesmerised by the surrounding jungle. For the three days I spent in the National Park (two on the Argentinian side, one on the Brazilian) I couldn’t get enough of the views. It seemed that behind every corner of the way something new and wonderful was waiting for me – an alligator basking in the winter sun, another waterfall, the most beautiful butterflies that just rested on my knee during my lunch break, or a curious coatí (which I was always cautious of). I went there during the first week of my RTW trip back in 2006 and it was the perfect start to what turned out to be an awesome year of travelling.

It’s magic and forlorn at the same time. Being thousands of kilometres away from the nearest land (that being Chile) can be an intimidating thought. It’s a place where the airstrip of its international airport is as long as the island is wide (4 km to allow for space shuttles to land – no kidding) and allegedly the inmates of the local prison are allowed to roam the island – because where would they go? It’s also a place of unique sunsets, impressive volcanoes and – due to its remote location – you will encounter relatively few tourist. Most I met where honeymooners or single women taking time off.
For the week that I spent there I would explore the island by foot, bicycle and motor scooter, always cautious of the semi-wild horses – and all that in the shadows of the mighty moai, the truly impressive stone sculptures Easter Island is known for.

A sudden change in weather meant I had to stay for a week before being able to cross the Andes on the impressive road into Chile that passes right by Anconcagua, the highest mountain of the Americas. Tough luck, given I spent my time mostly on a bicycle to get from one winery to the next, while the evenings were filled with steak (at that time, this was great) and movies. When it wasn’t snowing, the views of the Andes rising behind the wineyards were utterly stunning. Also, even though I felt at first that I was “losing time”, the unfavourable weather forced me to stay put in one place for a couple of days after two months of almost continuous travel and simply explre the surroundings of my current “home”, something I only later learned to appreciate.

The driest desert in the world, part of which so desolate that NASA uses it to reasearch how primitive life forms could exist on Mars. This particular area is aptly called Valle de la Luna – Valley of the Moon. And is right next to Valle de la Muerta – Valley of Death. While it may not sound overly inviting makes for great day trips (on foot or horseback) and is so very different to anything you will have seen.

This island on the Bolivian part of Lake Titicaca boasts some grand views of the Cordillera Real’s snow-capped peaks, ancient inca ruins – and no cars. I visited on a day trip from Copacabana and walked from Challapampa in the north to Yumani in the south, which I highly recommend despite it being somewhat strenuous (due to the altitude of around 4,000m). Better still, spend the night and get blown away by the clear skies and the resulting multitude of stars.