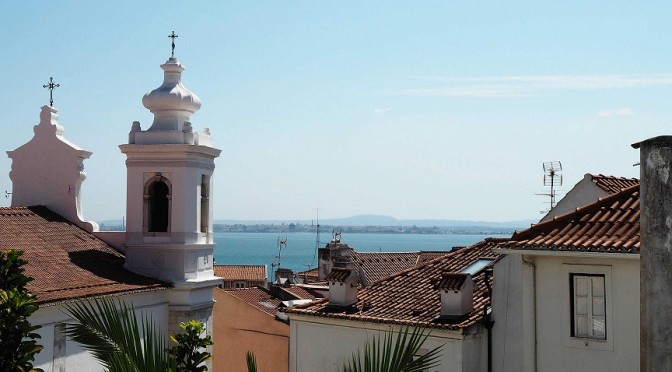 We hadn’t put in a lot of detailed planning when boarded the plane to Lisbon. I mean, I had turned the pages of my Lonely Planet guidebook and there were places that I wanted to go to as well as places friends and family had recommended. Still, my arrival at Lisbon was with a relatively fresh mind, open to explore the city without too many expecations.The first walk from our apartment down Avenida da Liberdade I checked out people and buildings and figured I was going to like Lisbon. The longer we stayed, the more I came to like it and when we left, both Mr A and I agreed that we would return to Lisbon some day (soon).

Lisbon is a pretty city. It’s situated along the banks of the (quite mighty) Rio Tejo, nestled between, on top of and around an array of hills (bring good shoes!), with beautiful and generally well-restored old buildings that add to the overall charm. Altogether, we spent three-and-a-half days exploring Lisbon, near-by Sintra and adding a trip to Belém and another two or three wouldn’t have hurt.

Thanks to an extensive network of metros, trams and local trains, Lisbon and her surroundings are easy to navigate. If you enjoy walking, even better! The narrow streets of the Alfama are wonderful to lose yourself in. Be prepared for sudden stunning views.

On our first day we took inspiration from the walking tour suggested in our Lonely Planet guidebook and strolled up and down the hills towards the Castelo de Sao Jorge via many a miradouros (viewpoints) and a good amount of churches.

The next day we took the train to Sintra (Lisbon Rossio train station is a sight in itself!) to amble in the gardens of Quinta de Regaleira because we had found this well on the Itsabandoned Instagram account (@itsabandoned) that we absolutely needed to see. As good a reason as any for visiting a place, isn’t it?

It was well worth the visit! The initiation well is situated in a magnificent park with a large number of little fountains and pretty towers and there is a main house which is more like a small palace in itself.

The garden has an enchanted Alice in Wonderland-esque feeling.

Originally we had planned on visiting Castelo dos Mouros (castle of the Moors), picturesquely situated on a hill overlooking Sintra.

On our last full day we took the Elevador de Santa Justa for a grand mid-town view across the city, then visited the Convento da Ordem do Carmo (Carmo Convent), a medieval convent and church that were destroyed during the 1755 earthquake and turned into an open-air museum.

Later we – along with a whole lot of other tourists – crammed into a tram to Belém to visit the famous tower which ended up being a little disappointing as in that it looked just like on photos and wasn’t any more impressive. Firstworld problems, I know.

We walked along the shoreline – and then almost all the way back as the centre of Lisbon was closed due to a strike and neither busses nor trams were operating.

This also meant that we had to postpone our planned ride with the famous and much photographed tram No 9 but we did that the next morning after breakfast so as not to miss out on this truly scenig experience.

For our next visit I have planned to use at least one of the  many ascensores and elevadores (funiculars and lifts) that take you up the steepest parts of many Lisbon streets – and to have dinner at Terra again.

Have you been to Lisbon? What were your favourite impressions? Did I miss out on any “must see” places?

Alicioustravels: My favourite impressions of Lisbon