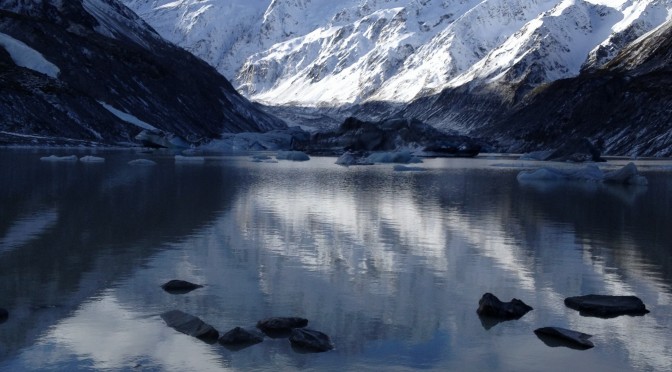 Another scenic drive took us along Lake Pukaki to Mount Cook village, a quaint little settlement in the Southern Alps, flanked on three sides by mountains and gateway to a wide array of walks of all difficulties. Originally, Mr A had been wanting to do some cross-country skiing there but then decided that a nice little walk would do. We went for the “light” option, completing the fantastic Hooker Valley walk to the glacier lake of Aoraki/ Mt Cook the afternoon we arrived. First we weren’t sure if it wasn’t too late to start the hike but then decided to give it a go and hurry back if need be. As it turned out, we’d been right – there was hardly another soul on the track. Altogether – in roughly 3-4 hours of walking – we encountered less than 10 persons. All that in perfect winter weather: there was snow on the ground but not enough to make it dangerously slippery, the air was crisp and the sky (mostly) clear. At the lake, we had full view of Aoraki/ Mt Cook and her glacier and there were icebergs floating in the water. We had all that to ourselves and took in the calmness of solitude. Breathe in. Breathe out. Repeat.

There was still plenty of time to get back to the hostel before the sun went down and after dinner we found a spot on a couch right next to the fireplace where we snuggled up with the provided blankets, books and a cuppa. Wonderful! The next morning we had coffee at the legendary Hermitage Hotel where we learned more about what a cool and fearless guy the omnipresent Ed Hillary really was – and on the way back to our car we saw Mr A’s first kea. We were ready to leave the mountains behind for now and head towards the coast again.