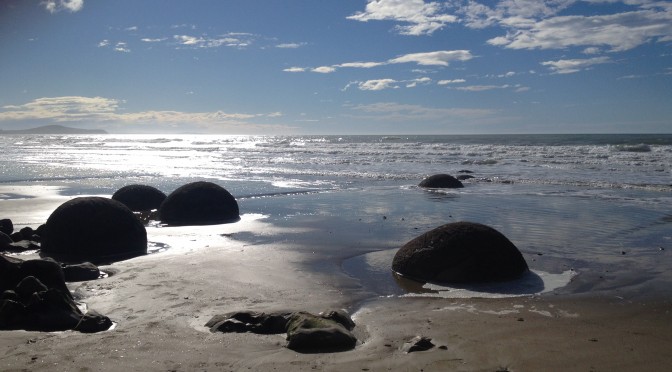 The very relaxed drive towards Oamaru led us through Omarama (which led me to add “rama lama ding dong” each time someone mentioned the place – hilarious, I know) and past Maori rock paintings before we arrived at beautiful Old Bones Lodge, where we were welcomed by the lovely owners and their dog that did look a lot like a sheep. In the afternoon we wanted to see penguins waddling ashore as Oamaru is famous for its resident blue penguin colony. The owner of our hostel, however, told us to see the yellow-eyed penguins instead – from a free lookout quite nearby. So we did.  And waited. And waited some more. After the best part of an hour, we’d only spotted one single yellow-eyed penguin, which is great given it’s the rarest of all penguins but not so great when you’ve expected…well, more of them. Also, I’d caught a pretty bad cold and was just not very positively excitable. Not even by the so-called supermoon that was lighting up the background quite brightly. The next day was a Sunday and we started off by visiting the local farmers market – something I don’t nearly do often enough. I bought bags full of greens – pak choy, fresh coriander, kale, leek – and closely inspected each of the handful of stalls. Everyone seemed to know each other and it had a very warm and homely feel. After coffee we headed home and I treated us to a thick, brothy coconut milk-based soup before having a much-needed sleep. Later in the afternoon we went to see the blue penguin colony at Oamaru pier and weren’t disappointed. Altogether, 70-something of those tiny birds waddled ashore in little groups, some more, some less impressed by the New Zealand fur seals lazing about.

Blue penguins are the smallest penguins, reaching only 30cm in length/ height. That’s tiny! If they didn’t come in pods, you probably wouldn’t notice them at all since they’re really only the size of a bigger rat or ferret. They are also the colour of stones and could easily hide between them if they didn’t want to be spotted. Both Mr A and I enjoyed the show the animals put on and stayed for a good hour until there weren’t any more penguins expected for the night (and we were freezing despite the thermal layer we’d put on).

On Monday we set off for Dunedin following the coastal road instead of number 1 highway. We stopped for coffee and a walk on the beach at Moeraki boulders and then continued towards our destination – with the weather constantly changing from sunshine to rain.