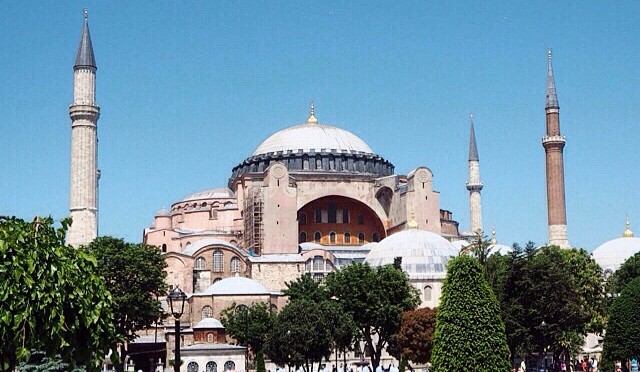 Istanbul, the old Constantinople, former capital of an enormous empire, essence of many tales – historic or fiction and more recently newly emerging hotspot for the cool and en vogue.

Along come Mr A and myself.The only things I had heard about the city before were “It’s awesome, you should definitely go visit” and “I haven’t been but I’ve heard it’s awesome”. Not exactly a showstopper. Still it took Mr A and myself years of travelling to other – equally awesome – places to finally decide to travel to Istanbul. Four days in late May it was to be and Mr A found a great special online that kept our costs down.

The taxi picked us up at 4:30am for an early morning flight that got us into Istanbul at 10am. We took the metro to the hotel, were able to check in after a little discussion and made our way to Topkapi palace, one of many sights the city has to offer.

At night, Mr A had a surprise for me: We went to one of the many rooftop restaurants. However, it was the only rooftop restaurant that serves a vegan meal (since its manager is vegan) and we enjoyed an amazing sunshine with a wonderful dinner.

Monday morning we slept in a little, picked up traditional Turkish food for breakfast and made our way to Taksim Square, down Istiklal Caddesi and in the afternoon we jumped on a ferry from Emenönü to Karaköy on the Asian side to explore the area, then took a bus north to Üsküdar to watch the sunset.

On Tuesday we arrived at Hagia Sofia early to avoid the crowds and after a quick lunch explored the Basilica Cistern and Sultanahmad Mosque which is also known as Blue Mosque.

There we let ourselves get blown away by the beauty of its intricate mosaics.

In the evening we strolled along the shore of Üsküdar again, enjoying a cay with the sunset.

For Wednesday we rewarded ourselves for such a wonderful holiday by haggling at the Grand Bazaar before visiting Süleymaniye mosque and having a last stroll around Beyoglu area before heading to the airport and back home.

At just after 8pm our plane back to Austria took off – with two culturally and otherwise sated travellers on board who already knew they’d be back before long.

We definitely belong to the group of people who have been to Istanbul and loved it.

Have you ever been to Istanbul or are you among the ones wanting to visit? What is your favourite memory of the city?

I will be sharing my experience of vegan Istanbul and a lot more photos in the coming weeks.

One thought on “Alicioustravels: Istanbul”