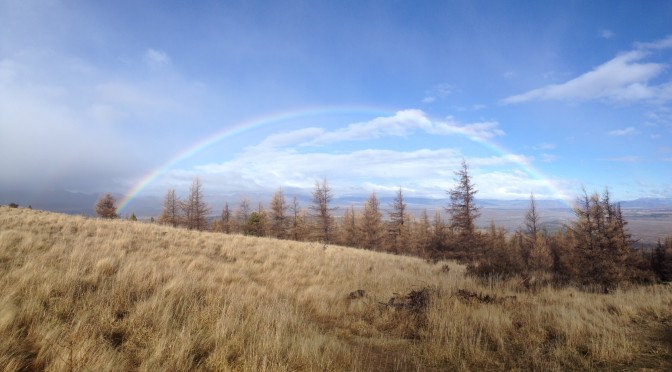 After an informative (and literally cool) morning spent at the
International Antarctic Center* we made our way south, then
inland towards Lake Tekapo. All along the way we were awarded with the most scenic scenery (?!) and, to top it off,
a gorgeous sunset. I know there is no such thing as a bad sunset but this was one of those that makes you stop your car and appreciate the intense and quickly changing colouring of the sky and clouds. And take photos. Lots of photos. The next morning we first walked to the well-known and much-photographed Church of the Good Shepherd, a stone building in an almost too perfect setting on the edge of Lake Tekapo. Mr A took what felt like a thousand pictures before even he got too cold and we hopped into Run 77 café for a coffee (and free wifi!). When the rain decreased to a mere drizzle we took a walk along the lake and up the little hill to Mt John
Observatory. On our way we saw the most perfect, complete
rainbow which we stopped to admire (and photograph) until the wind became too strong and started to seep through our much-loved primaloft jackets (which had already become the most valuable piece we’d packed for our holiday). On the top we took in the magnificient view of the Southern Alps all the way to Aoraki/ Mt Cook but had to forego the planned extended hike due to the gale-force wind. Back at Lake Tekapo village we visited the Church again because Mr A had not nearly taken enough photos there – and guess where we ended up after dinner? First at a golf course above the village and soon we found ourselves in front of the Church once more. To be fair I have to admit that I quite enjoyed seeing Mr A so passionately in action. There are but a few things that get him as excited as the possibility of a good (a *really* good) photo and in Lake Tekapo he had the rare opportunity to take long-exposure shots in a so-called Dark Sky Reserve. This is how brilliant they turned out to be: So having cold hands and red nose most definitely paid off.

The only downside was that we missed the unusual if not
impossible sight of an aurora australis. Well, that leaves
something for next time.

*We bought our – drastically reduced – tickets through BookMe and they included everything from penguin feeding to film screening to the awesome Hägglund Ride. This website is definitely worth having a look at!

This, by the way, is a Hägglund: