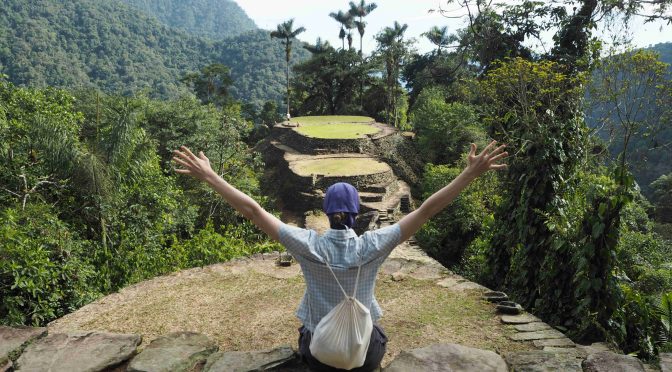 It was breathtakingly beautiful, horrendously humid, oftentimes stupendously steep, stunningly scenic – and the most arduous trek I’ve ever completed.

After my friend’s wedding, the anticipated 5-day trek to Ciudad Perdida had been the item on my “things to do in Colombia”-list I had most eagerly looked forward to.

Beforehand I had contacted Expotur, one of only five tour operators allowed to organise this trek, to find out whether they would be able to accomodate a vegan. Absolutely (and they very much lived up to that promise, see below).

Also, Expotur seem to be taking their responsibilities as an employer very seriously: they pay for insurance for their guides and generally pay them more than others.

The jeep from Santa Marta dropped us off at Mamey/ El Machete, the starting point of the trek. There we were served lunch before hitting the track and soon stopped at the first swimming hole for a refreshing dip. The path meandered comfortable through the forest, first rather smoothly, then steeper up a little hill. Due to the high humidity and temperature we sweated profusely. The seven of us took in the views and feasted on mango that was lying on the ground like apples do in Austria in autumn. On the top a snack of fresh watermelon was waiting for us. Also, it started raining.

We had left Santa Marta late since two of our group hadn’t shown up on time. Therefore, the whole first day was delayed, resulting in us getting properly drenched. It’s not called a rain forest for nothing. From our watermelon stop it was another 40mins, maybe an hour, downhill until our first camp and with the rainfall increasing, the dirt road became more slippery. In the end, pretty much everyone had fallen at least once and we were all caked in bright orange mud. However, we made it to camp where we got changed and even had the opportunity to shower before dinner and and early night. Instead of a bedtime story, Miguel, our guide, told us about the more recent history of Colombia.

Having grown up in the midst of a civil war (that still rages on in some parts of the country), his growing up was very different to how each of us experienced our youth. We left for bed deeply moved and impressed by the content of his stories as well as his openness towards us. Each day, we got up at 5am, left around 6am. As we went to bed early this wasn’t a problem though and usually Miguel didn’t even have to wake us as we were already up by the time he came around.

Day 2 was maybe the most strenuous of all: from camp we started uphill for a while, then descended for what seemed like an eternity on a steep slope. Before arriving at our lunch place, we crossed a flat, grassy area and walked past a traditional village of indigenous people that still live in the area. After a big plate of pasta we set off again. Crossing the river via a swing bridge, then climbing for a good hour before descending to Camp 2 – Paraíso, the gateway to Teyuna, the Lost City.

While this may have been an absolutely stunning day, the high speed of our guide and his constant bickering at my slow but steady pace kept me from enjoying myself as much as I could have. When I hike, I walk (also) for the sake of walking, not (solely) to get from A to B. I will take in the scenery, stop for photos or to drink water. This, he could not understand and since most members of our group were of the fast kind as well, myself and another girl made up the back. I didn’t mind. I usually only arrived at our rest/ refuel stops a couple of minutes after everyone else. It wasn’t as if I was keeping them from doing more interesting things.

From Day 3 I simply started off 10 minutes before everyone else.

At Camp 2 we realised that there was only one other group on the same schedule as ourselves and altogether were less than 20 people which was great because we had ample room at dinner time and the bathrooms and showers were never too crowded.

Day 3 was Lost City day. We set off early again and climbed the alleged 1,200 steps to Ciudad Perdida. Miguel told us about its original purpose and how it was outlined before we walked to its main part to explore for ourselves. The breathtaking atmosphere of being at such an ancient and remote location was further enhanced by the stunning vistas of mountainous rain forest – and the fact that there were not even 20 visitors around. We sat there for an hour, maybe more, enjoying the loud silence of the jungle, sucking on the lollipops Miguel had handed us. From there, we began to retrace our steps, picking up our backpacks at Camp 2 and hiking out to Camp 3 (the place where we’d had lunch the time before). We only got a little wet this time.

The next morning turned out to be slow. There must have been something in most people’s dinner and a few unlucky souls had spent a good part of the night on the toilet and still felt far below average.

The day before I had made the decision to walk out with the rest of my group (all of which had opted for the 4-day version) and it turned out to be a good one. We made our way to Camp 1 where we had a snack of fruit and fresh passion fruit juice, then walked another 2 hours back to El Mamey where lunch was waiting for us. At this point, most of us were able to stomach food again.

Soon, we packed ourselves back into the jeep and were on our way to Santa Marta again where we said our goodbyes and dispersed in different directions (only to accidentally catch up with each other over dinner. Santa Marta isn’t that big).

Great, actually. Except for the first day when I had only fruit for breakfast (since the bread contained milk and the muesli carmine) I didn’t go hungry. For lunch and dinner I would usually rice with some protein (lentils) and vegetables, once we had pasta, once mashed potatoes. For breakfast I had arepas, fruit, bread. And for snacks we had fresh pineapple, watermelon and bananas. There was always plenty and we could have seconds whenever we liked. Vegan never was an issue or up for much discussion. Of course I was asked why but when I replied with my standard “because I don’t see a reason not to” everyone seemed content. Miguel still offered me sweets he knew weren’t vegan – out of hospitality, not to tease me – and I would politely decline (after double-checking the ingredients, which he fortunately didn’t mind at all).

Duration: You can complete this hike in 4, 5 or 6 days. I highly recommend the 4-day option for persons of average fitness.

Costs: COP 700,000. Pay any less and the difference is taken off your guide’s pay. Pay more and you’re being overcharged.

Difficulty: While not being technically difficult, the heat/ humidity and the incline of the trail make it strenuous. Rarely will you walk on flat(-ish) terrain, it’s mostly steep uphill or steep downhill.

Comfort: The camps we stayed in were surprisingly comfortable and clean. They all had flush toilets and (cold) showers and despite the dense bunk situation the mosquito net gives you a hint of privacy.

What to bring? The packing list you get with your booking is pretty comprehensive (if short). Bring only essentials. And an extra t-shirt and pair of socks wrapped in a plastic bag. You’ll thank me later for it.

On the whole and thinking back from the comfort of my apartment it was a most memorable trek that I would do again.

Thank you, Expotur, for providing us with such lasting memories!

Have any of you completed this trek? How would you rate it?

Alicioustravels: Salt and the City 2015