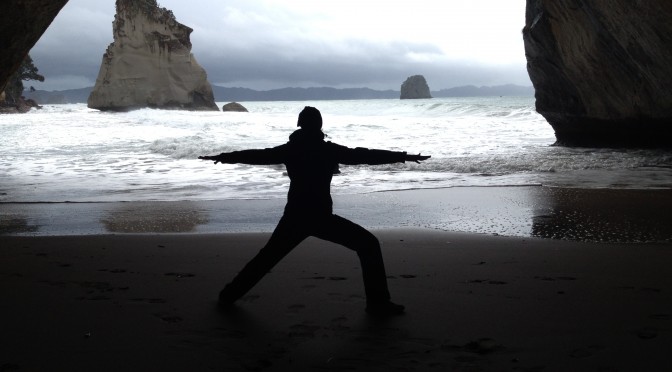 On my past trips I’d never made it to the Coromandel Peninsula and since everyone who had been there was raving about it, I made it my chosen destination on our recent journey (everything else I let Mr A pick). There were two places I wanted to visit: Cathedral Cove (a beach best known from the last scene in The Narnia Chronicles: Prince Caspian) and Hot Water Beach, where at low tide you can dig out your spa due to thermal springs underneath the sand.

Have I been going on about how brilliant the weather was? Because it was – until we got to Coromandel. We arrived at Tatahi Lodge in the rain and said rain wouldn’t stop for the whole two days and three nights that we spent there. Of course we went  to where you cross to Cathedral Cove but were stuck at Mare’s Leg Cove, unable to walk over due to the unusually high low tide and the storm and were stuck in Cathedral Cave. Like so often, one letter made all the difference… We were soaked when we arrived back at the car but nevertheless drove the short distance to Hot Water Beach with a spark of hope that we would be able to soak in our private thermal pool. Well, I must have done something pretty nasty recently and karma was a bitch. The weather was relentless, the beach impassable. The warrioress didn’t help (but I liked the photo op) The next day, a Sunday, we drove to the ferry to take us to Whitianga, the nearest town, to have a look around. That’s all we ended up doing because it was as lively as many little Austrian towns on Sundays, i.e. deserted with all the shops closed. We had a look at the spa but found it overpriced and not overly welcoming, therefore moved on and only bought groceries at the supermarket, then took the ferry back to our car. Because the day was still young we visited the local Cathedral Cove Macadamia farm and Purangi estate winery where I had a cup of gluhwein before the (generous, informative and much appreciated) tasting even started. At night I prepared a heartwarming meal for us and we simply decided that we’d come to see Cathedral Cove and Hot Water Beach some other time. Setting off towards Auckland we gave Cathedral Cove a last chance but despite the weather having improved considerably – it wasn’t raining anymore and would be sunny by the time we arrived at Auckland – the tides and the wind were still not in our favour. Anyways, off to Auckland.

We took the long but rewarding drive along Highway 25 that crosses the peninsula, then brings you to Coromandel Town, down south to Thames, a rather pretty town which both of us took an immediate liking to, and finally on State Highway 1 and to Auckland.