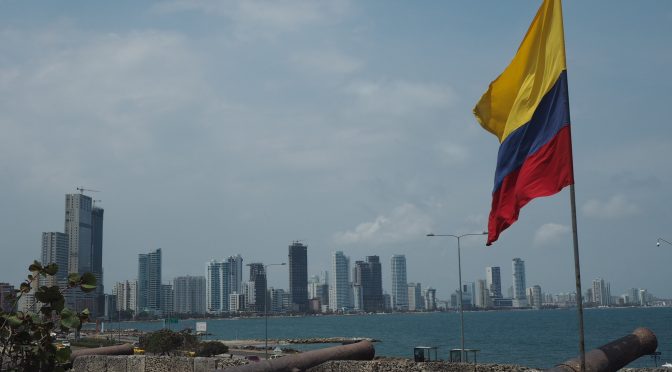 It’s been less than two weeks since I returned from Colombia. What had initially been a trip to attend my good friend’s wedding turned out to be a most memorable holiday – and Colombia made it very easy for me to not want to go home by the end of it. Where did I go?

Since I only had just under three weeks of vacation there was no way I was going to rush through the country. Instead, I took my time to visit fewer places and explore these more thoroughly.

Basically, I travelled the Caribbean Coast between Cartagena and Santa Marta, with day trips to locations nearby.

What did I do?

I arrived at Cartagena where I spent the first couple of nights catching up with my friend who was going to get married and her friends and family (some of which I had already met before). Then there was the beautiful sunset wedding on the rooftop of one of Cartagena’s best hotels and another day to recover from the festivities.

From Cartagena I took a bus to Santa Marta which I used as home base for day and multi-day trips: Together with a wedding guest from Austria I spent two days hiking and bird-watching in Minca, a quaint little village in the hills behind Santa Marta, I discovered the Lost City by way of an exhausting 4-day trek through the jungle. For the first time in 10 years went scuba diving before visiting Tayrona National Park for a day of hiking, swimming and general enjoyment.

On my first day in Santa Marta I got most of these things organised – and still had enough time to take a bus to Taganga, then a boat to Playa Grande (which was definitely a playa, however, not grande at all).

The day after I returned from the Lost City trek I took a rest day and even treated myself to a soothing massage in the sister hotel of the place I stayed at that time.

It was wonderful. Rarely have I experienced such a relaxing holiday – especially in a country I had imagined to be much more difficult to travel (my Spanish is only so-so and the stories your hear about Colombia did not fit my impressions of the country at all).

The people were super friendly and welcoming, the food delicious, getting around easy-as, I felt safe at all times, there was salsa music *everywhere* and my eyes couldn’t get enough of the colours everywhere – be it the different shades of green in the rain forest or the bursts of colour on the walls of Cartagena’s houses.

Have you been to the Northern part of Colombia? How did you like it? Were you similarly amazed?