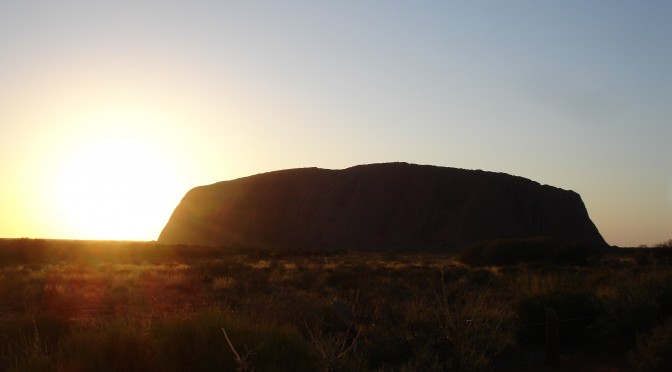 Before I decided to move to Australia for a year in 2007, I travelled the country quite extensively. I wanted to know the place and its people and get a feeling for it before committing to spending what initially looked like an indefinite amount of time there. Over the course of 3 months I travelled from coast to coast, up and down and right through the centre. I also visited my relatives in Tasmania for the first time (hi there, Mel!).

My route was as follows:

These were only the places where I spent the night and often not very exciting. Sometimes, however, the places I expected to be dull turned out the most thrilling.

And what did I do in all those often weird-sounding locations? You need not hold your breath any longer:

From Port Douglas north of Cairns I took an amazing dive trip to the Outer Great Barrier Reef and saw my first-ever whales from the boat, from Townsville I dived to the (in my opinion overrated) wreck of SS Yongala where I heard humpback whales sing and then spent a few days on Magnetic Island, spotting my first koala in the wild. Airlie Beach saw me to an overnight sailing trip of the Whitsundays which are indescribable in their beauty. Fraser Island left me speechless due to its abundance and beauty of nature. I could have spent the rest of my life sitting on top of Indian Head, watching the water action below as the sun slowly set.

I didn’t mind it raining in Byron Bay despite missing out on surf lessons because I still got to watch the whales from the lighthouse.

In Sydney I caught up with close friends and we not only went to see a Cirque du Soleil show (Varekai) but also completed a sunrise climb on Sydney Harbour Bridge, the view from which absolutely blew my mind. Had I not been in love with Australia already at that point, this certainly would have tipped me over. There were numerous strolls in the Botanical Gardens and possibly hours spent sitting by Mrs Macquarie’s Chair, taking in the unique vista. Also, there was pie from Harry’s Café de Wheels, James Squire beer on tap and my first taste of kangaroo meat (this was way before my vegan time) as well as my first live AFL game. I got very excited when I saw (and subsequently bought) a bag of Haribo gummi bears at Aldi in Manly.

The lengthy train trip to Perth was spectacular! There wasn’t a minute of boredom crossing the continent, watching the Nullarbor’s vast amount of space through train window, letting my thoughts wander until they’d wandered enough and came back calm and rested.

In Perth I stayed with friends for a week and was treated to everything wonderful Perth has to offer: from live footy at Subiaco Oval to a day trip to Rottnest Island to wonderful lunches on sea food and the odd walk across King’s Park. It was such a good place to arrive at and stay for a couple of days before the relative frenzy of a full time traveller’s life had me back.

From Perth my journey north started towards Geraldton and Kalbarri, where I spent a day exploring Kalbarri National Park and even got to bicycle along the coast, something I’d normally never do – I hate biking uphill. However, there were whales to watch from the coast… On to Monkey Mia where I got to feed the “friendly” wild dolphins (with the help of a roommate), laughed at the hilarious pelicans vying for attention and had to accept that just for myself and a British gentlemen there would not be a trip to see the stromatolites I’d been reading in Bill Bryson’s book Down Under about.

My diving trip in Exmouth was utterly disappointing (due to unprofessional staff on the boat), a follow-up trip the next day had to be cancelled due to bad weather. However, I hitched a ride to Turquoise Bay and used the strong currents there to snorkel among corals and parrot fish in the crystal clear waters of the Indian Ocean.

Spending the night in Karratha was simply meant to break the trip from Exmouth to Broome but turned out to be great fun when I was the only non-permanent resident at the hostel and some regulars put me in a car and showed me around – the beach, Aboriginal rock paintings and mile-long trains bound for Port Hedland were photographed while the main attraction were the guys and gals themselves.

Broome was…I don’t know. Not my kind of town, I guess. I learned a lot about the beginnings of the pearl diving industry which was way more interesting than it sounds, but Cable Beach wasn’t nearly as spectacular as everyone had told me (many of whom had actually never been there, only heard of it themselves) and for the first time I felt that I didn’t belong there.

Kunnunurra had me take a scenic river cruise and learn about mangos, the next day watch the AFL Grand Final as well as visit a rodeo. Good fun but nothing that was going to tempt me to stay any longer. Same feeling of not belonging.

From there it was straight to Darwin. Litchfield National Park is definitely a place I’d like to visit again but the city itself didn’t do much for me (cities rarely do).

The train to Alice Springs was tedious. From there I took a 3-day outback tour including Uluru, Kata Tjuta and Watarrka National Parks. Those three days were worth every effort of getting there. Uluru left me speechless – not only because people ignored the pleas by its owners not to climb it. It’s massive, beautiful and very much alive. I walked around it and much appreciated that we were to be there for sunset as well as for sunrise the next day. I found Kata Tjuta to be almost as intriguing as Uluru – and Watarrka, a place I’d never before heard of, was another highlight of my RTW-trip. We completed the rim-walk that included a swim in a natural pool aptly called “Garden of Eden” and I once more realized that I could ever only be truly happy in nature. No city, however great, will ever be able to do for me what a walk in the bush will provide me with.

Back in Alice I took the pilgrimage to the original Alice Springs (and jumped – because Alice springs at Alice Springs in Alice Springs), but could not find the School of the Air, therefore I only dropped by Royal Flying Doctor Services HQ and got an insight into the amazing work they do.

Soon it was time to train on to Adelaide, where I visited the beach Glenelg for a calming sunset and drove to Barossa Valley for a happy day of tasting wine and produce.

On to Melbourne, a city I immediately warmed towards – no matter the weather. It may be her distinct European vibe, the little alleys lined with cafés (with really good coffee), the best Italian food since I’d left home and the beauty of seeing how each and every suburb is different.

A weekend in Canberra confirmed my hopes that I would want to live there – most definitely. I could sing an ode to Canberra and you are very likely to hear it some day. She’s nigh perfect. Plus, the company was great and I received the best possible introduction to the Aussie capital that feels like a small town with all the amenities of a big city.

Back to Melbs and on to Tasmania it was, where my distant cousins I had never seen before picked me up from the airport and treated me to two absolutely wonderful weeks including trips to Port Arthur, hiking Cradle Mountain and Walls of Jerusalem National Park, exploring Hobart, introducing me to more family in Devonport, taking a Franklin River cruise, driving through Tasmania’s green centre, taking in the rough West Coast (hello, Roaring Forties), stunning at the windswept Northern Coast and camping in Wineglass Bay.

And those are only the things I spontaneously came up with and does not at all comprise a conclusive compilation of everything I did, experienced and was treated to on my first trip to Australia. Those things also exclude the kindness of many a person I came across on this journey. It seemed that not only was I determined to like Australia – Australia was also determined to like me and swept me away in a wave of friendliness and her “No worries, she’ll be right, mate”-attitude I immediately grew to love.

If I had to pick favourites or was asked to choose the “must-sees”…I couldn’t. I loved the West Coast for it’s solitude and untouched feel, the Centre for its barren vastness and richness in culture, Northern Queensland for the ocean and everything it does for the lifestyle, Melbourne for feeling like home, Tasmania for its rugged beauty, Canberra because I actually was home for a while and because you can see the snow on the mountains in winter despite practically living in the desert.

Australia will definitely see me again.

Have you travelled Australia? What comes to mind when you think back now?