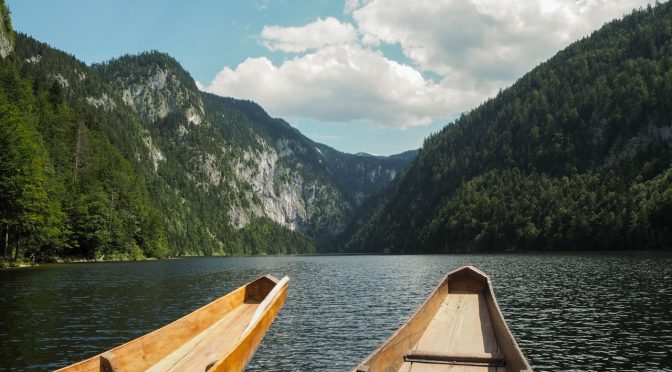 Can I get a big YAY for Salzkammergut? Because it never disappoints?

By July it was still so long until we’d get to spend a few well-deserved post-wedding rest days at Die Wasnerin, so Mr A decided we should take a Friday off and booked us into a four-star hotel in Bad Goisern that claimed – on the phone and in writing – to cater for vegans (so I wouldn’t have to cook and could fully enjoy our holiday – thank you, Mr A!).

So far so good.

The hotel was nice and clean, however, while we had the most delicious four-course vegan dinners, at breakfast the situation proved more dire. This was mostly thanks to the staff which were just lacking. The ostentatiously labelled “vegan corner” at the buffet had all sorts of cheeses and milks – only none of them plant-based. On my inquiry they put out a carton of milk and on the second day even produced a mini-bowl of spread that was good for two slices of bread.

On our third day we didn’t even get coffee in the morning. I can’t even.

The manager, who seemed to be responsible for the wonderful dinners (which we highly praised him for), didn’t at all seem to care when me mentioned the terrible service at checkout.

Therefore, I’m not going to name the hotel here as I don’t want to draw undeserved attention to it.

Now, to the mountains.

On our first full day, a Friday, we drove to St. Wolfgang and took the steam train up Schafberg where the morning mist was slowly lifting.

We crossed through Himmelspforte (Heaven’s Gate) and made our way around the backside of Schafberg, which provides sweeping views of some of Salzkammergut’s most beautiful lakes, and back down to St. Wolfgang. Unfortunately, Mr A slipped on a wet leaf and hurt his ankle. Therefore, on Saturday we didn’t complete a circuit of Traunstein like we had planned but started our day stopping at a pharmacy to pick up bandages for Mr A’s foot.

We then decided to do what tourists to and take a cruise around Traunsee.

It wasn’t too shabby.

From Gmunden we set off and went all the way down south to Ebensee where the boat turned and brought us back to our car.

When we got off the boat a lot of people were standing around, looking. So we looked too and realised that the annual Dirndlspringen was in full swing: People dress in dirndls and jump from a plank into Traunsee.

Here are some photos.

Because it was only just after mid-day, we enjoyed being tourists in our own country and because the sun was out beautifully, we drove down to Hallstatt, a place I’d never seen in warm weather before (but in all different kinds of rain).

Turns out, Hallstatt is especially nice on a sunny day. Before heading back to Vienna on Sunday and because Mr A was still limping and couldn’t walk too far nor too steep we paid Kammersee another visit.

I mentioned Kammersee in this post just over two years ago and it also made my list of the 10 most magical places I’ve been to. It is simply wonderful – as is the way to get there.

First you pass along beautiful Grundlsee.

At the far end you park you car and walk some 20 minutes until you reach Toplitzsee.

From there you take a boat to the other end of the lake, then walk across to Kammersee. And here it is:

Filled up to the brim with the most delightful impressions we were  ready to drive home and take on another week of work – while still holding dear memories of our most recents walks in nature.

What are your favourite places at Salzkammergut? Is there any lake you think I should definitely visit? An alm I must not miss out? Let me know in the comments, on Facebook or Instagram – or show me your best-kept secret on Snapchat.