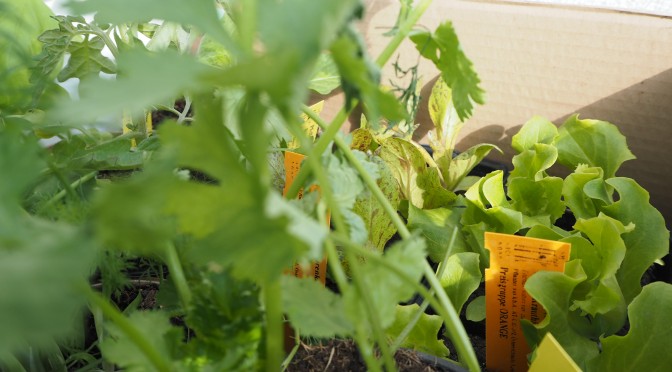 Just like I had predicted, I did not exclusively stick to the shopping list I had written down together with Mr A for last Friday’s visit of Raritätenbörse (Rare Plant Fair) and a few extras found their way into my bags, which I now have to stow/ plant somewhere so Mr A doesn’t notice them until their too big to get rid of (just kidding, of course I proudly presented every little weed to him).

First, pictures of the fair:

I already mentioned Arche Noah in my blog post here.

From them I bought

Then I discovered a stall dedicated solely to plants one can cultivate on balconies – by Biosphäre Waldgarten and – completely unexpectedly – bought some more:

What I could not find/ did not buy were

Since the weather hasn’t played along nicely this weekend (it was very cold last night and won’t be warm until mid next week), I didn’t get to muck around as I had planned. However, I’m somewhat optimistic I will at least be able to plant the lettuce into a flower box (where it grew abundantly last year) and replant the tomatoes, eggplant and capsicum plants into slightly bigger containers later this afternoon. We’ll see.

For next Saturday, Mr A and I have planned this year’s first tour of IKEA and Obi (the local warehouse) to stock up on necessities, such as red paper napkins but also – finally – a desk for myself as well as the remaining containers, soil and trellis for our balcony. Can’t wait!

Then it’s only another two-ish weeks before I can eventually put everything out and together. I’m so excited to be sitting in the middle of my balcony garden, soaking up the evening sun, surrounded by my sprouting, blooming and soon bearing plants!

How are your plants coming along? Have you put anything outside already?

Aliciouslife: Balcony garden – How are we coming along?

3 thoughts on “Aliciouslife: My Balcony Garden – The Haul”