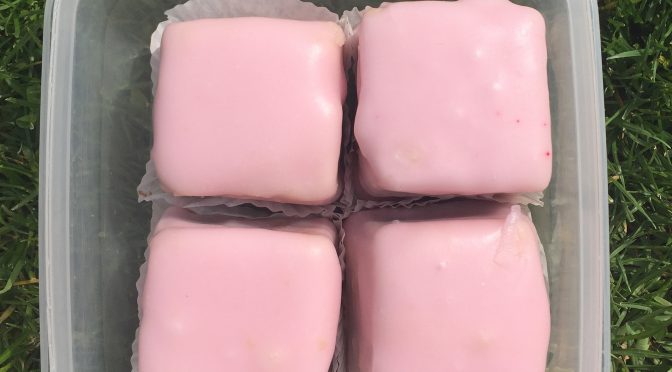 Veganmania 2016 was a blast! It’s getting bigger and better every year. Just like last year the weather was in favour of us and we got to enjoy vegan food, drinks, cosmetics, fashion and whatnotelse in the sunshine.

This year I was especially adamant to stop at each stall for at least a quick browse – and quite often quite more than that. You may have followed me on some of my (mostly) food adventures on Snapchat or Instagram.

Here is the whole story

On the first day I had initially planned on having a first look after yoga class, then decided on grabbing “something light” to eat – and ended up with a delicious, if not exactly light, raw vegan Tiramisu from the never-disappointing Easy-going bakery. Also, I picked up a poppy seed croissant for Mr A and a nut-filled croissant for myself for breakfast the next day.

On Thursday, a public holiday, Mr A and I completed this year’s first hike up Rax from Preiner Gscheid, our favourite route up the mountain and treated ourselves to burgers from I love Veggie Burger afterwards. Needless to say I was way too late to grab one of Bernds Welt’s famous Punschkrapferl. So late, in fact, that they had completely sold out by the time we arrived.

Mr A, who is usually not such a big eater, opted for ice cream from Veganista while I had a cookie from Zuckero on my way home.

As I had Friday off, another opportunity presented itself and I got up bright and early to wait at the stall of Bernds Welt when they opened, Tupperware container in hand. I wasn’t the only one! 4 Punschkrapferl later I was on my way home to drop them off, only to return for a pulled jack burger from Jenonne and a hot dog from Veganz for dessert.

I was relieved of my usual Saturday morning duties (i.e. the grocery shopping for the week) due to the fact that we were spending the weekend with my parents so I once more visited Veganmania for a satisfying breakfast of a lentil-based burger from Vleischpflanzerl, followed by fresh juice. Dessert was a nut cake from Zuckero with vanilla ice cream on top.

And whilst I was there looking at things I picked up face powder and foundation from Little Rabbit along with a bottle of alcohol-free white wine from Fürnkranz.

Long story short: I immensely enjoyed myself and can’t wait for Veganmania 2017 to happen. Rumour has it it’s going to be in front of the Vienna City Hall which would be legend.

Were you also there? What did you enjoy the most? Next year let me know so we can catch up!