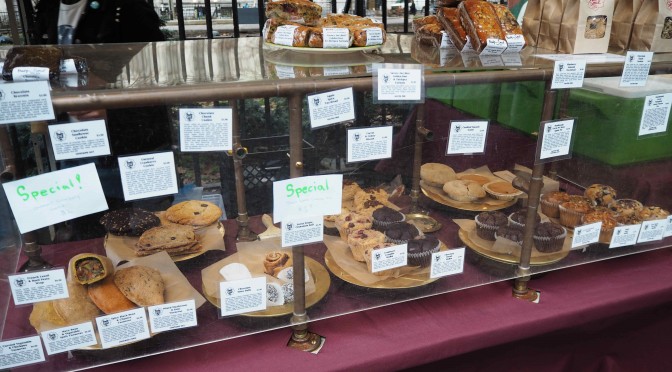 First things first: New York is foodie heaven and yes, this also includes vegans. There are so many different kinds of plant based food stuffs available – from all types of what is considered fast food or junk food to downright healthy food (well, the American idea of healthy food so not always what a European may expect) – you won’t know where to start and where you’re going to put it because you were actually already full before dessert. Aren’t first world problems the best problems?

For just over a week Mum and I made our culinary way through vegan New York by help of the ever-supportive Happy Cow-app.

In the mornings we mostly had breakfast at our apartment (a toasted cinnamon bagel with peanut butter and banana with tea), we packed apples and bars for in between and then usually ate out for dinner. On three nights I cooked us pasta with sauce which we bought from the organic supermarket around the corner from our lovely Airbnb-apartment in Brooklyn (hi Michelle!) because we were too tired to decide what to eat, once we had lentil soup.

The day we arrived we were pretty knackered from travelling and decided on having an early dinner at M.O.B. – Mum’s first-ever burger!!! Delicious food and we also loved the setting. On our first full day we walked from the northern end of Central Park all the way down to Washington Square Park – while Mum got her coffee and bagel from Starbucks I headed across the road for a filling, made-to-order wrap from Pure Food.

When we got hungry again, it was Angelica’s Kitchen where we had a lovely dinner of curry (Mum) and something that I don’t remember (me) but what was pretty yum. After spending pretty much all day exploring Liberty and Ellis Island INCLUDING the walk-up to the crown of Lady Liberty, I introduced my Mum to Chipotle’s veggie bowl (I had ordered sofritas but the bowls came with veggies only – and they didn’t charge me for the guac). They were well received by our protein-craving tummies! In the morning I had discovered an all-vegan bakery stall at the little market on Whitlam street, owned by the same folk who also are present at Union Square farmers’ market. As always, I went overboard and nibbled on their tasty baked goods for days.

Mum and I both loved our falafel sandwiches from Taim for their simplicity and the authenticity of their taste.

We’ve both travelled the Middle East on more than one occasion and agreed that this was exactly how falafel sandwiches should taste like. We enjoyed them sitting on the little bench in front of the little restaurant.

Our quinoa bowls at this “salad” bar near Union Square Park were degraded by the sweet and sour and soy sauces they were drenched in quicker than I could scream NOOOOOO.

Blossom Du Jour was a beautiful Sunday lunch pre-Broadway show. I have never had un-chicken taste so much like chicken. I also got a key lime cheesecake which I savoured after dinner that night and which was heavenly. With the excuse of wanting to explore Williamsburg Mum and I got on the train to Brooklyn. Our first stop, however, was Dun-Well Doughnuts.

This place seriously does not need an excuse to venture off Manhattan island.

And I don’t even like donuts – or so I thought. I bought one for each of us – and then two more to go. I should have bought a dozen and if someone of Dun-Well Doughnuts reads this: You should clearly consider expanding to Vienna! For our last meal in New York I chose a burger with sweet potato fries at By Chloe on Bleeker Street. Man, this place is popular! We arrived at a good time and I don’t know how she did it but Mum secured us a table while I ordered our food. Only minutes after we’d sat down to eat the restaurant was so packed that people were queueing OUTSIDE.

In general, I also had pretty good experiences with most bakery chains like Pret a Manger or Au Bon Pain: There was always at least one vegan item on their menu. Also, juice bars are rather common and I had a green, vitamin-filled drink for lunch some days.

On our last days I went to Wholefoods at Union Square Park where I could have spent a whole day merely exploring. However, Mum got bored after about 15 minutes so I parked her at the checkout and ran around like a crazy woman, searching for the things I’d put on my vegan shopping list (such as faux gras, some bars and a few other items).

What she found a lot more exciting was the Peanut Butter & Co store where she joined me in loading up our bags.

Except for the milk she had with her coffee and parmesan on two pasta dishes, Mum ate only vegan food with me and she didn’t seem to mind at all. In fact, she often commented on how much she liked the food we ate. Best of all, she never uttered remarks like “It’s vegan and I didn’t even notice” but simply enjoyed what was on her (and sometimes also what was on my) plate.

What are your favourite places to eat in New York City? Feel free so share them in the comments, on Instagram (tagging @aliciouslog so I can see your posts) or on my Facebook page.