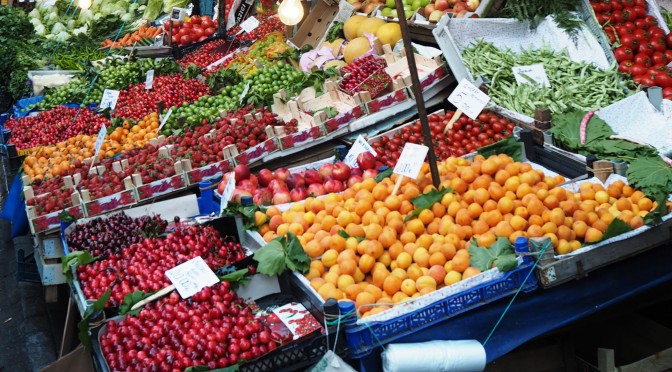 Just like every other place in Turkey I’ve so far visited Istanbul is definitely also a culinary highlight. While the Turkish cuisine is full of lamb kebabs, ayran (a yoghurt drink) and baklava there is also plenty of room for stuffed roasted capsicum, all different kinds of variations of eggplant and lokum.

For breakfast I usually had fruit we picked up at supermarkets and I had brought a few fruit and nut bars from home as an emergency stash (which I didn’t touch).

We also had plenty of Turkish tea (cay) and Turkish coffee.

Our first dinner was a surprise Mr A had taken the effort of organising: Dinner at one of Istanbul’s many rooftop restaurants. Fine Dine Istanbul at Arcadia Blue hotel, however, was the only one of 15 (!) who had positively replied to Mr A’s email, whether they would be willing and able to serve vegan food – because its manager is vegan.

Mr A had a printout of their correspondence with him and showed it to the waiter who took it to the kitchen and returned with what they had on offer for us: a meze plate for starters, tomato soup and as a main course veggie casserole and spinach cannelloni. We went for the mezes and the main dishes to share and everything was simply delicious. The chef really knew how to make the most out of those veggies – and the spinach was just so tasty!

The spectacular view across Blue Mosque and Aya Sofya only added to our wonderful dinner experience which was topped off by the complimentary food platter the chef sent us.

Our dinner at Fine Dine Istanbul was an altogether pleasant experience and we can definitely recommend the place. You may want to send an email in advance though as they didn’t have any vegan dish on their regular menu.

The next day we took the tram out to Taksim place, then strolled down Istiklal Caddesi with the occasional stop for coffee, cay or a fruit juice. In a little side street, Mr A suddenly saw the v-word in the window of a café and already we were inside. I had planned on visiting Community Kitchen anyway, only was the location I had bookmarked outdated. How lucky we were to accidentally come across it!

A huge plate of meze and a friendly conversation with the lovely lady on shift later we were on our way to Galata Tower and soon on a ferry to the Asian part of Istanbul.

We walked around laid back Kadiköy, then took a local bus to Üsküdar and I didn’t pay attention to my rumbling belly until I was really hungry and ended up having a plate of chips (French fries) for dinner.

Not ideal but not all bad either because we found not only lokum without honey but also roasted chick peas and I kept snacking on them all through the marvellous sunset.

On our third day I had simik, the abundant sesame ring, even though I wasn’t not 100% sure it was vegan. There may have been egg on it, I don’t know and wasn’t able to otherwise find out.

When we again crossed over to Üsküdar to watch the sunset again I first scouted the streets for dinner and found the most delicious cig köfte at a little shop. With this and the odd sample of lokum (apparently, the square ones are more likely to be vegan while the sausage-like round ones aren’t) we sat and watched the sun go down behind Galata Tower once more.

After visiting the Grand Bazaar and Süleymaniye Mosque on our last day we walked across Galata Bridge to Beyoglu where we’d passed another vegan café two days earlier. We quickly found it and had the most beautiful melanzani kebabs and chickpea fritters at Egoist Han Café, run by Ceyhan who speaks excellent German and was not only a great host but also helped me find more tasty lokum and beautifully scented spices at Galata Tower Spices (where he used to work).

For dessert he served us the best chocolate muffin I’ve ever had. Ever like EVER. It was fluffy, it was chocolaty, it was perfect. In fact it was so utterly delicious that I did not take a picture of it but simply savoured every single mouthful of it.

Oh, there was also vegan food on the plane! Even though I had to ask for it and state my name on the way to Istanbul (and received it without having to identify myself on the way back), it was tasty and looked heaps better than the choice of chicken or fish that everybody else was served. I loved that I received my own little menu <3