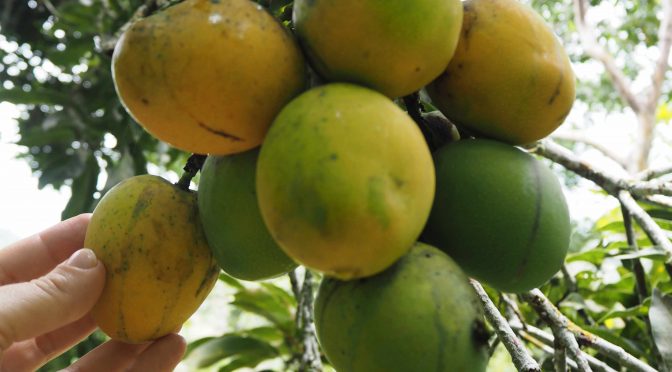 Despite my observation that Colombians seems to derive nearly all of their protein from animal-sources (namely meat and fish), eating vegan in Colombia turned out to be surprisingly easy. And delicious!

Flying there, even the food KLM presented me was tasty. On the streets you will find carts laden with the most luscious tropical fruit cut up for you to eat: Often there will be pineapple, watermelon or mango served in little plastic cups. My favourite was green mango with salt and fresh lime juice. Yum! With the help of Happy Cow app I already had a few places in Cartagena that would feed me in all else failed and I enjoyed my visit at each of them (sometimes multiple times, like at Girasoles or at Santuario del Yoga). At the wedding I was served a crunchy salad as an entree, a creamy vegetable risotto with mushrooms as main, red sorbet and a fruit platter as dessert. Well done, Movich hotel!

So I wouldn’t miss out on the sweet treat, I brought a Luna white chocolate macadamia bar (which I still cannot believe was vegan) to have when everyone else had the wedding cake.

When we would go out for dinner, I always found a pleasant alternative and everywhere the staff was extremely eager to acommodate me and always upfront if something may contain animal products. This was probably the biggest surprise: How seriously people took my stating of being a strict vegetarian and did their best to find or create a tasty dish for me. The managed every single time. My hotel in Santa Marta had breakfast included in the room rate and it looked like this:

At night I mostly ate either at Ikaro Cafe Can you see why?

Ikaro Cafe has a mostly vegan menu, clearly marking each dish, while Lulo has only a few vegan dishes but their Lulo smoothie which is to die for as well as serious mojitos. When I arrived at Minca my friend had already found a place where I would be fed: Casa Loma  where the chef is allegedly vegan and cooks a vegetarian meal each night with a vegan option. Make sure you let them know you’re coming. The place was all the was up the steps (tricky since it gets dark at 6pm), with a gorgeous view over Santa Marta in the distance and the food was divine.

I also found vegan empanadas there

Most surprisingly, it was even able to eat vegan on my four-day jungle trek to Ciudad Perdida with Expotur. You can see in detail what delicious food they provided me with *here*.

You can see, not only did I have a great time in Colombia, I also did not have to worry about getting fed too much. I can definitely recommend the Caribbean part of Colombia to any vegans willing to travel.

Have you been to the Northern part of Colombia? How was your experience?