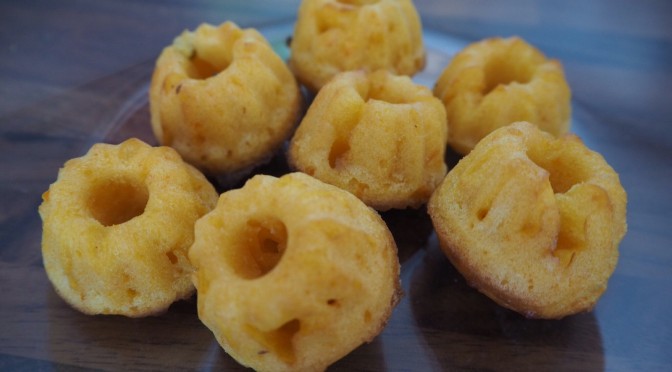 Regularly will I come across recipes I really like. These I will then bookmark, copy into a word file with similar recipes or print out. Often, I will soon forget about them.

Every now and then, however, I will open a website and quite literally drool over the keyboard. These are the recipes I’ll scrawl on a post-it, put in my wallet and try the next weekend. Or the next day. Or as soon as I get home.

Today’s recipe was of the latter category. Unexpectedly, it was featured in the online version of the Austrian newspaper Der Standard which runs a weekly vegan recipe blog called 365vegan.

In the three weeks since it appeared online I made those muffins three (!) times, tweaking the recipe ever so slightly. For my latest version which I also followed for Mr A’s all-vegan birthday brunch last Sunday I washed, then boiled the oranges for 45 minutes before mixing them with an immersion blender. I switched to a hand mixer and slowly added the remaining ingredients, then spooned the dough into little tins. Into the oven they went, out they came hot and delicious and smelling sooo good!