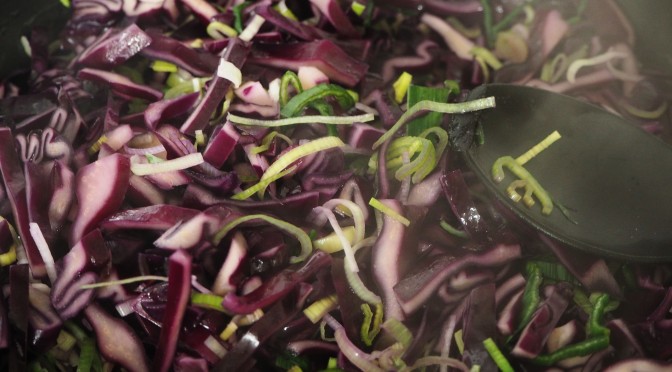 Two weeks ago I noticed that there was a free fruit basket with each order of a Kochabo box. I only briefly mentioned the recipes planned for that week to Mr A and we immediately agreed that we would reactivate our subscription to get the ingredients for three vegan meals delivered to our door the next Monday.

As usual the order arrived at the beginning of the two hour time slot we were communicated during the day (boxes are delivered between 5pm and 10pm on Mondays).

When I came home, Mr A had already checked the ‘vegan’ sign on both the box and the bag with perishable things (which was already sitting in the fridge).

He checked because we’d mistakenly received a vegetarian box once but noticed too late for the driver to return. When I called Kochabo they agreed to deliver another box – this time actually vegan – free of charge.

I’ve also called them in other “emergencies” – like when I still had my expired credit card registered in my payment details or when I had missed the Thursday 12pm deadline to place an order to be delivered the following Monday – and every single time the person on the phone was not only extremely friendly but also really tried to help and make the best of the situation. In each case we quickly found solutions that made everyone happy.

As soon as I entered the apartment that night I had to open the box, check every item, take it out, caress it little…no, this goes to far.

I had a look and decided I was going to cook the first meal that night even though it was later than when I usually like to eat dinner.

The first night we had the Kochbox – warm bulgur salad with zucchini, carrots and lemon.

Tuesday’s dinner was a red cabbage quiche that, quite contrary to the photo of the prepared dish, was enough to feed four!

We stuffed ourselves until we could eat no more – and then there were still two more servings which I froze for future office lunches.

The third recipe was for gazpacho, a soup that is prepared and served cold and perfect for summer, which came with a side of garlic ciabatta and guacamole.

I prepared it before we set off to my friend’s wedding in Carinthia that Friday and it gave us all the energy we needed to drive from Vienna all the way to Obervellach near Großglockner. Again there were leftovers to keep for work.

You can find all Kochbox recipes from past boxes here (in German).

Oh, I almost forgot the fruit bowl: While my first (also free-with-purchase) bowl in winter was rather dull in composition, now its contents were flavourful peaches, delicious nectarines, beautiful apples, just-right kiwi fruit and about a ton of almost ripe bananas we were munching on for the next week.

Just like before, both Mr A and myself really liked all three dishes (bulgur and quiche actually made it onto his “list of recipes to keep in mind when Alice asks what I want for dinner”), which I think is a first for Kochabo!

Besides the points I raised in my first post on Kochabo, I want to add that each recipe is a ‘truly vegan’ recipe.

It doesn’t substitute something normally made out of animal products but is its own dish in itself, mostly colourful and always flavourful. So, a big thank you to the person responsible for creating those recipe. Whether you are vegan yourself or not, you definitely know that vegan is more than just eating side dishes, salads or imitating meat!

Have you tried Kochabo or any similar service before? How was your experience?

If this made you curious and you want to try Kochabo for yourself, the code TZVY6R will give you a EUR 10 discount on your first order – and myself another EUR 10 on my next 🙂

One thought on “Aliciouslyvegan: Kochabo once more”