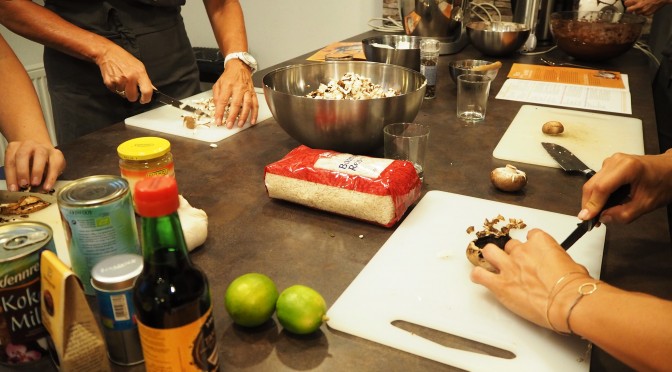 Last week another highlight of my budding blogger-carreer took place: I was invited to a vegan cooking class with Sonnentor.

Sonnentor is an Austrian company with a strong ecological conscience: their teas, spices and – most recently – coffee are all fair-trade and mostly locally sourced. They even share the names of their farmes on the website. 80% of its packaging materials are made of renewable raw materials.

When Maria from Sonnentor contacted me a few weeks ago whether I would like to join their vegan spice-focussed “Würz dich um die Welt” (“Spice your way around the world”) cooking class I was thrilled!

Sonnentor has been my trusted dealer for dried herbs & spices as well as tea for years!

Ever since I received my first tea advent calendar I have been a loyal customer (buying said tea calendar each year to keep at the office) and therefore was really looking forward to the recipes, especially given that Sonnentor also sells spice mixes for all different purposes (barbecue, rice, potatoes, tofu – the list goes on) and I have been rather void of ideas of what to use them for beside the obvious.

We were greeted by lovely Maria and chef Bianca Gusenbauer from Bianca isst and after a much-appreciated aperitif of apple mint tea (apple mint is a kind of mint, not apple AND mint) and grilled vegetables the 12 of us were seated around a big table and introduced to the beautiful world of spices.

Bianca was in her element when she talked us through the dishes we were going to cook with so much passion that it was obvious to everyone she’d found her calling in working with food.

We learned about the different spices and how to taste them, then got to savour the spice mixes of each dish and tried to find out which individual spices the combinations were made up of. We also did parallel-tasting of, for example, ceylon and cassia cinnamon, vanillin and real vanilla, plain and roasted cumin, whole and ground allspice.

It is incredible who much one is able to taste when concentrating!

After about an hour – and a cup of green coffee, another novelty to my palate – we formed three groups of four and started cooking. But not only before we had each received an apron – and a spoon, because the class was all about tasting, remember?

Over the course of the evening, my spoon went into many a bowls and every single mouthful was promising. Between cutting onions and grilling carrots there was ample time to have a good look around everyone’s cutting boards, taste, converse and decide whether these mushrooms needed more coconut milk.

In two intense but fun hours we created eight dishes (a soup, two salads, three mains, a dip and dessert) – which of course we then got to savour.

It was hands down one of the best meals I’ve had in years, possibly in my life.

The amount of flavours was incredible and my tastebuds were enthusiastically dancing polka. It didn’t take long for the first non-vegan to ask “are you sure this is vegan?” (which usually means “this is incredible”). Of course it was! Vegan and still mind-blowingly delicious, who would have thought?

As if all this wasn’t good enough already we were encouraged to take home the leftovers (talking of sustainability!) so I had another beautiful lunch the next day and froze two more portions to take to work some other time.

I asked whether I was allowed to share the recipe of the utterly scrumptious Aladin’s banana chocolate soufflé* we had for dessert – I am!

Looking forward to my #aliciouslyvegan Friday post two weeks from now? Bet you are!

If you would like to spice up your life in a similar style, stay tuned for Sonnentor’s upcoming Würz dich um die Welt (veggie and non-veggie) workshops in autumn!

Are you at all familiar with Sonnentor? Which is your favourite of their products?

A huge thank you to Sonnentor for having me, to Bianca Gusenbauer from Bianca isst for showing me a whole new world of combining flavours and to Yvonne from Freude am Kochen for the initial introduction!

*For this wonderful dessert I even paused Sugar-Free July for one evening!

4 thoughts on “Aliciouslyvegan: Cooking with Sonnentor”