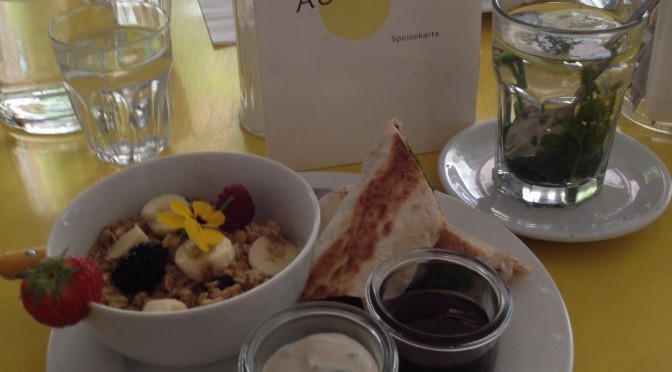 The other Sunday, which was a SUNday indeed, Mr A and I revisited one of our favourite breakfast haunts in Vienna: Augustin.

From outside, it looks dark and unwelcoming and certainly not like a place I would voluntarily visit, even though they recently painted the door what I can only describe as “Augustin-mint”.

From the inside, however, it is absolutely lovely: upholstered chairs, an antique-y bar setting, dark wooden panelling, chandeliers and – for summer – a perfectly gorgeous courtyard.

There is always a fresh flower on each table and the food is simply divine. The restaurant does have a smoking section but it is at the very back of the restaurant and only accessible through a small door, so the stench usually is not THAT bad. For weekend breakfasts, however, Augustin is now a non-smoking venue, something I greatly appreciate.

Last year the service was really (REALLY) bad: lazy waitresses who forgot half the order and tried to charge you things you had never consumed/ received, rolled their eyes at you when you ordered a glass of tap water with your coffee etc.

This has changed drastically over the last couple of months, however. We were more than pleasantly surprised: everyone was super-attentive and despite the (usual weekend) crowd we received both our drinks and breakfasts after only a few minutes. We were actually asked if we wanted tap water with our order. Best of all, now there is a vegan option (along with regular set breakfasts you can “veganise”), which of course I had to try.

It’s called Go Vegan and consists of a (warm) wrap (lettuce, smoky tofu, tomato and avocado) with a soy-based lime dip and porridge (oats, dried cranberries, shredded coconut, nuts – and cardamom! I was in love) with maple syrup on the side. It’s awesome! Very tasty, freshly prepared and not too filling, but enough for a lazy Sunday breakfast. Mr A went with the staple Basic Breakfast (two bread rolls, butter, jam, honey, nutella) and was equally excited – especially over his cappuccino which he called “sensational”.

We are most definitely coming back.

Two things you will want to keep in mind: First, make a reservation! We saw countless people being turned away because they were fully booked way past lunch time. And second, especially if you are a non-smoker, when it’s too cold to sit outside, I advise to ask for a table in the front part of the restaurant, not the room where smoking is usually allowed, because it still reeks of cold cigarette smoke there (which is, frankly, disgusting).

…actually, there is a third thing I may want to make you aware of: not only does their breakfast rock, they also serve great burgers, salads and sweet things over the course of the day with enough vegan options available that not even the pickiest person will leave hungry.